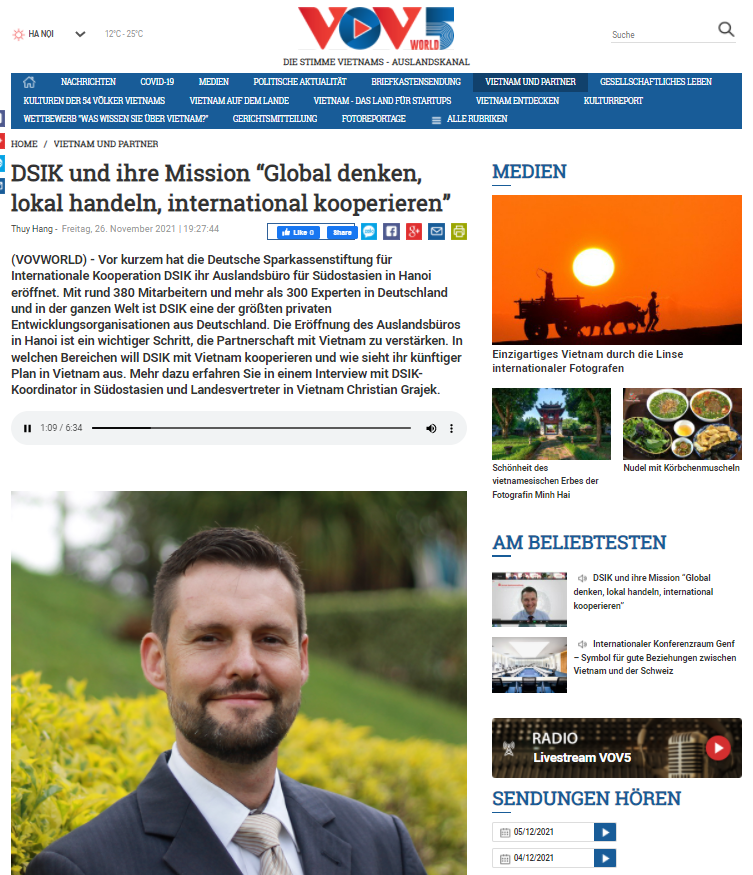 DSIK was broadcasted by the Voice of Vietnam (VOV) in 2 channels VOV5 and VOV1, relatively on 26th and 29th of November 2021. In which, DSIK was referred as “eine der größten privaten Entwicklungsorganisationen aus Deutschland“ – one of the largest private development organization in Germany.

Mr. Christian Grajek - Head of Vietnam Operations, Regional Coordinator South East Asia – was on an interview with VOV’s reporter. The representatives of VOV showed much interest and appreciation for German Sparkassenstiftung as well as its project activities in Vietnam.

The Voice of Vietnam (VOV) is a national radio broadcaster, among the 3 biggest broadcasters in Vietnam which are directly under the government of Vietnam. In fact, the first broadcast from VOV is a proof that DSIK is bringing more visible changes, hence calling more attention in a nationwide scope in the project country – Vietnam.

The program brought out activity outlines in Vietnam, applauded the results that DSIK has succeeded in last years. Mr. Christian Grajek also shared a glance of future activities for Vietnam projects in upcoming time.

Listen to the interview on VOV5 (German), VOV5 (English) and VOV1.

The Queen of Bhutan congrats Mr. Bernd Baehr for his contribution to Microfinance Institution